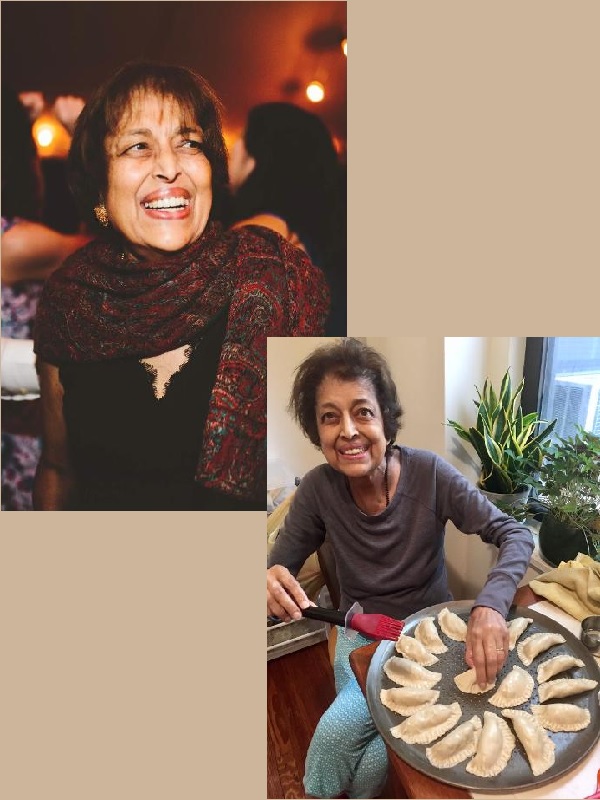 Nitina Balwantrai Sehgal, 79, Bethlehem, PA, passed away peacefully on Friday, July 8, 2022, at the farmhouse she shared with her daughter & son-in-law in Holland Township, NJ.

Born March 25, 1943 in Rajkot, India, Nitina was raised along with her older siblings, Satish Parekh (PhD) and Rohini Parekh by their paternal grandfather, Prabhashankar Parekh, affectionately called “Bapuji.” Bapuji encouraged the children to be educated, adventurous and slightly rebellious. And Nitina did just that!

In 1967, she decided to follow her brother as she always did as a child to the United States. She attended the University of Kansas, studying biochemistry, earning herself a Master’s Degree and PhD. During 1967-1970, besides studying, she traveled around the United States, Canada, Mexico and Egypt with bags bigger than an MG Car. She loved fashion, and the head seamstress at Saks Fifth Avenue would design custom clothes just for her.

Eventually after graduating, she received a position as a Chief Chemist at Mt. Sinai in Illinois. It was in Illinois where she met her husband, Prem Sehgal. They were married at the Watergate Apartments in Washington, D.C., and their wedding was highlighted on the 10 o’clock news. Together they moved to and worked in states all around the country: Wyoming, Illinois, Indiana, Texas, New Jersey and Pennsylvania. They found themselves in Texas the longest, where they raised their three kids: Amita, Sanjay & Shaley, and where Nitina continued leading research in diabetes. She was an author of many research papers, and in 1986 she was honored and read for her exclusive research of cell biology at a conference held in San Antonio.

Nitina was a master chef. Her way of showing love was how she constantly tried to feed everyone. No matter how she was feeling, she would always cook for and feed anybody who came to the house. Nitina was a great storyteller and everyone she met was always enthralled by her stories of her past, insights on life and current events. Some of her favorite hobbies were making jewelry and antique shopping. She loved telling jokes, especially one about a brick that no one could really understand, but her laugh was contagious and you couldn’t help laughing along with it. It was rare to ever see her without a beaming and joyful smile on her face. Nitina was a member of Friends of the Library Club, helping launch and fund libraries in less fortunate areas of the world.

Daughter of the late Balwant Rai and Saroj Parekh, Nitina is survived by her beloved husband of nearly 52 years, Prem K. Sehgal, her son Sanjay Sehgal and his wife Radhika, her two daughters Amita Starosielski and her husband Eric, and Shaley Sehgal (MD) and her husband Rakesh Cassiram, her sister Rohini Parekh and her husband Ramesh (MD), and her six grandchildren Dunia, Jagat, Nyla, Nikhil, Anika, and Eeshan. And all of her nieces and nephews, who she loved dearly. She was predeceased by her brother Satish Parekh.

Services will be private. Arrangements are under the care of the Johnson-Walton Funeral Home, 24 Church Road, Milford, NJ.

Memorial contributions may be made to the American Diabetes Association, PO Box 7023, Merrifield, VA 22116. https://diabetes.org

From: Dana and John Masselli
Our sincere sympathy goes out to the family. How blessed you were to have shared so many beautiful times with her and to have her enjoy your families so much as well. May your memories help you all during this difficult time.

From: Ben Marty
To Shaley and family My sincerest condolences for you and your family at this time. You have my deepest sympathy and unwavering support. Wishing you peace, comfort, courage, and lots of love at this time of sorrow. My heart goes out to you at this very difficult time. Take care. Ben

From: Diane Gonzalez
Rest in peace sweet angel...it was my pleasure to have know and spent time with a wonderful woman..my deepest condolences to my dear friend Amita and her family..

From: Lisa and Stushu S.
Heartbreaking news. She was so sweet. -always had a smile when I visited the house with balloon animals or painted rocks. Her love for her grandchildren was infectious. It was plain to see how much they loved her. At any rate, it's a sad sad time. That said, please don't refrain yourself but cry each and every time you need to do so. You've been wonderful friends. Our prayers go with you. -Lisa and Stan. Xoxo